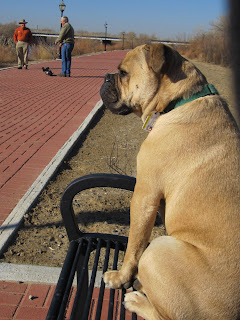 Hello there from Travelin' Jack...on the road. This time with a totally new twist. My TV screening debut for the television show, Travel Guide New Mexico. Yep, you heard right!!! This silly bulldogge has landed a spot on this wonderful television show. It will be called Jack's Tracks. Each week I will highlight a pet-friendly activity and destination in our beautiful state. Doggone lucky, I would say!

Here's a shot of me waiting for my debut shoot, watching the pros in action. I'm on the Riverwalk in Bloomfield. Great place to check out the river action as well as take a nice leisurely stroll. Here you see Richard Holcomb, the host of the television show, being filmed by Ace Cameraman, Chuck! He's my newest best friend (besides Jill of course!) because he follows me around with that big camera lookin' for my best angle!

Stay tuned....literally...for this dog's debut on the show. I'll keep you informed!

....doggie hugs and slurpy kisses!
Posted by Jack, the Bulldogge at 7:49 AM

Email ThisBlogThis!Share to TwitterShare to FacebookShare to Pinterest
Labels: My TV screening debut