Jack's national photo debuts! Thanks to my dog-zillion friends who voted for me! 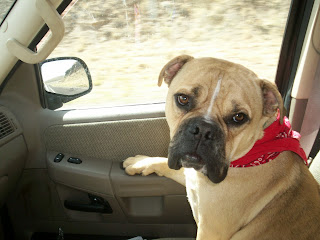 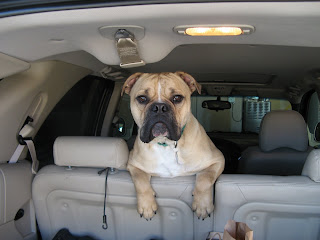 This was a wild and fast-paced week for this bulldog! And thanks to all of you who voted for me....I luv ya all!

First of all, I was entered into Bissell's MVP (Most Valuable Pet) Photo Contest. Little did any of us know how popular THIS national contest is! Bissell has a 12 week photo contest, and the Top Vote Getting Dogs (literally) win money for their selected charity....not to mention their mugshot on Bissell's vacuum boxes! Cool eh? Well, knowing how handsome and photogenic I am (modest too!) Jill and I decided to go for it! And you responded!

I didn't win...but here is the breakdown! In our single week of the contest there were 6582 dogs registered in the contest....almost like winning the lottery, eh? And I am just one little ol' pup! But the votes for Travelin' Jack came in...partly due to my good friends everywhere who voted for me and partly (maybe mainly?) because of my good looks in this snapshot of me lookin' out the back of the car ready to roll! BUT....in spite of the number of dog contestants, I came in at #63.....or in the top 1% of dog contestants. Not too bully bad in my books......and ALL BECAUSE of you good voters out there! No money for the Animal Humane of NM, but we hope they get some downline benefit from the contest!

2nd contest this week...whew...a busy one for sure! People Magazine has a website called PEOPLE Pets. They host a daily photo contest called "Click the Cutest". They select 12 pets from around the US daily to include in the contest. Yep, you guessed it! This little ol' (SHY) bulldog made the photo cut....the top photo above is my People Pets contest photo.....riding shotgun in the car. This contest has no prizes....just glory! Each of six pairs wins the "Cute" prize by voters clicking on their favorite. And yours truly, Jack la Lane, won paws down in my duo. 56% voted for me with 44% going to my competition! AND I must say....I had some strong competition. Mr. Hollywood was a pretty darn cool lookin' dog dude! So this was really an honor for me.....and once again I bow down to all my friends and fans who voted for me! Thanks a dog-zillion times again!

So that's how this week went. Made the Facebook pages, made national websites, made lots of new friends and fans...and just had a rockin' good time.

....hmmm wonder what next week will offer up?

doggie hugs and slurpy kisses!
Posted by Jack, the Bulldogge at 9:41 AM