Well, maybe I'm dog-xaggerating just a bit, but it sure SEEMED like a whirlwind world tour!  Why my paws were criss-crossing all over the state with so many book signings for our just released book,
PET FRIENDS. It was published by Rio Grande Books. 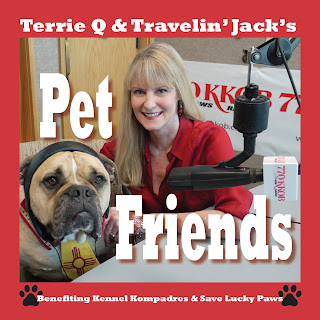 My very good bud, 770 KKOB Radio's very own Terrie Q.....(Queen of the Air Waves in my dog-pinion) and I have been autographing (Terrie Q) and Pawdigraphing (ME-Travelin' Jack) just anywhere important to be for such things. 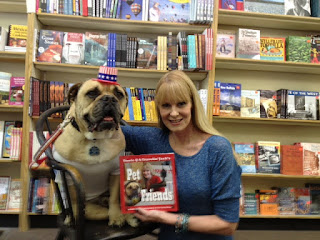 Like our first official roll-out of the book at Treasure House Books and Gifts in Albuquerque Old Town.  Here we are posin' for a candid (?) shot.  HMMMM....lookin' doggone snazzy if I do say so myself!  And my Terrie is one hottie too, don't you dogree!?! 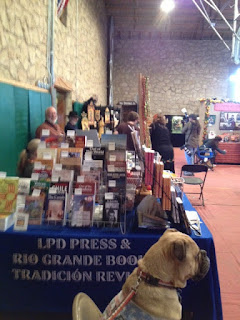 We followed that one up with a little trip down Old Route 66 to Grants....where I pawticipated in the fabulous La Fiesta de los Colores festival.  It was doggone interestin'.....lots of cool Hispanic artwork and such to check out in addition to BOOKS!  Grants is a pretty interesting place to visit.  It runs right along Rt. 66 west of Albuquerque, they have a great mining museum and other things too!

But no dog-lolligagging around right now...I'm on my world tour, let's not furr-get!

How-dog-ever, the calendar being as it is, I had to stop my whirlwind tour for another very important happening....especially for this travelin' dog....the 2013 New Mexico Goveror's Conference on Tourism! 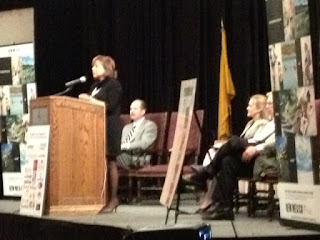 You can bet your bones...THIS dawg will be there!  Why anyone who is anything in the Tourism industry was there....INCLUDING our fabulous Governor Susana Martinez along with Albuquerque Mayor RJ Berry.  HEY....speaking of PET FRIENDS book!  BOTH of these important New Mexicans are in the book too!  They are posing with their dogs of course! 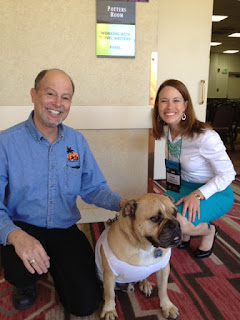 First of all....I'm the only dog there!  YUP-PUP...gotta represent my canine and feline travelin' friends at this here very important event!
2nd....I'm not just hangin' out....I'm WORKING!  I have been invited to be on the very prestigious Travel Writer Panel..

Here I am schmoozing up with part of the Travel Writer Panel....Glenn Abbot (he's a HOG!) well not really....he's a people. but he writes about those Harley motorcycle hogs...so he's mighty fine in my books!  And then our Moderator was none other than the bee-u-tiful Megan from ABQ CVB!  She is one fine gal...after all she understands the importance of pet travel and invited me to participate. 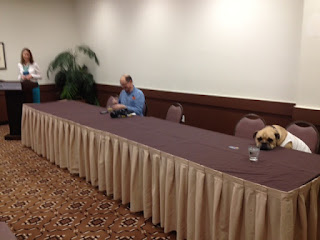 So I'm now ready!  Why I might just have to bark to hundreds...or maybe even thousands of folks about how doggone important PET TRAVEL is!  And who better to bark about this  topic than Travelin' Jack...New Mexico's pre-eminent Pet Travel Reporter! 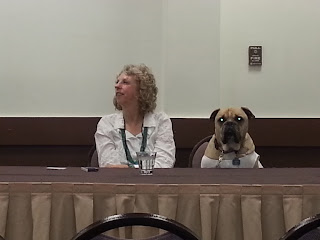 Here we go....give me a Question!  I'll doggone answer it by dog-golly! Shiny eyes and all! BOL! 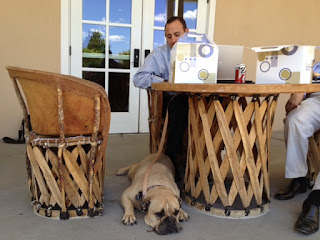 WHEW....made it thru the Travel Writer Panel with flying colors....time for a little break along with a picnic lunch on the PETio at Hotel Albuquerque-host hotel for the conference!  And they did a mighty fine job of takin' care of everyone...me included! 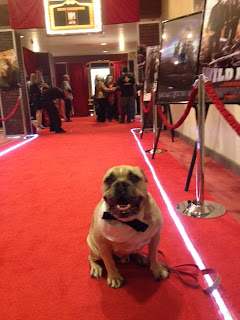 And now...end of the day and the FUN really starts!  It's time for the very important HALL OF FAME Banquet.  I've got my tux tie on....workin' my way down the red carpet....when WHAT do I see????? 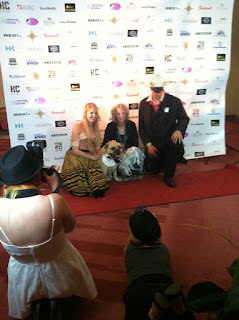 LONE RANGER!
You know they just finished filming that flick here in New Mexico...guess he's still hangin' around our great state....don't blame him!

BUT...I'm getting my pic with him no-dog-doubt-about-it!
Take a Look at ALL those PUParazzie snappin' our photo together! 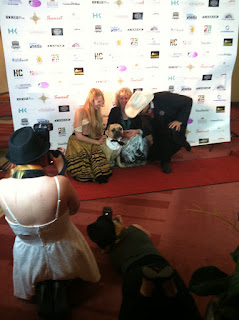 What's that you say Lone Ranger?  You want a bulldog sidekick for your next Block buster movie?  YEP......I'm your dog-man!  I'll make a bully of a fine dog sidekick!  Just talk to my Manager wouldja please? 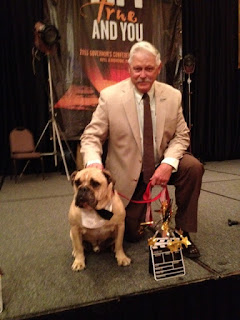 But now it's time to get serious.  There's a rumor around the Hall of Fame banquet that my very special friend, George Brooks just MIGHT be added to the prestigious list of HoFamers!  He's got MY vote for sure!  Why not only is he Executive Director of Ski New Mexico.....where he invites a dog-zillion people each year to comve visit and ski our snow!
BUT also......
He's the former Ski Coach for UNM...and took their Ski Team to a national championship no less!
He's a CHAMP in my books furr sure!

Why he's so important that I just had to get my pic snapped with him.
CONGRATS George!  You are the BEST! 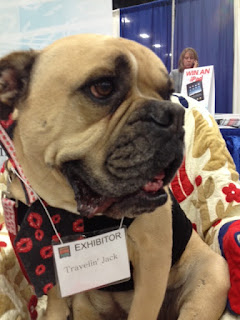 And now it is time to get back to that whirlwind world book tour!  NOW I'm heading out to the South West Book Fiesta!    And check this out!  I've even earned my very own EXHIBITOR Badge....But of dog-course!  That only makes sense to me...being New Mexico's ONLY award winning Dog-Author! (why I might even be the world's ONLY award winning dog-author! not sure but wouldn't surprise me one kibble bit!) 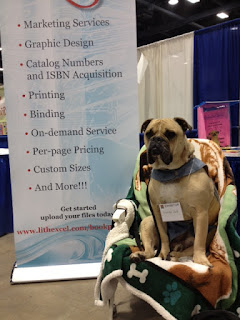 OK....I've got Book Signings everywhere at the Fiesta!  First at the LithExcel booth.  After all, they are the fine folks who put my award winning book together for me.... 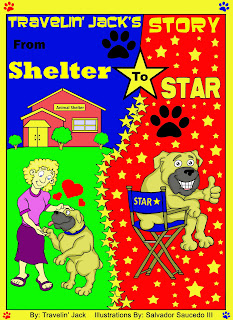 Pretty doggone cool, eh?  Here's a link to it, if you just hafta get one for yourself!
OH...and of course proceeds from the book support New Mexico Animal Welfare too!
And after THAT book signing, I'm heading back over to... 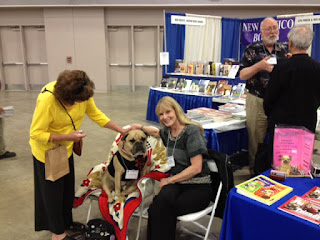 ....pawdigraph the other book PET FRIENDS with my cover-girl gal Terrie Q...again!  LUV her...she's just too cool, eh?  Yup...we signed away...and if YOU-yep YOU need to get your own copy of our book...which of course helps pets at the shelter too!.....click on the link above!

But the fun wasn't over after the book signing.  Why did you know that I-Travelin' Jack, Dog-Author Extraordinaire-- am also a POET?
YUP-PUP it is true!
I penned this little poem for Mother's Day...

An Ode to My People-Mom by Your Loving Dog-Son, Jack la Lane 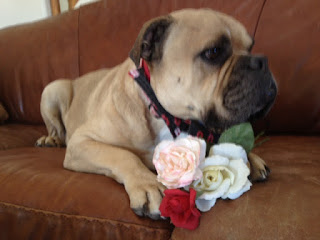 P is for the Pats on my head I get a thousand times a day.

E is for Encouragement you give me in every human way!

T is for our Time together….every minute, every hour, every day!

M is for the Many ways we spend our time in work, in rest, and play.

M is for the MOSTest-Bestest Mom who could have ever come my way!

Put them all together….they Spell PET MOM—words that bark out loud and clear to ME!

Thank you Mom…for adopting me and raising me to be a proud dog-son! You’re TOP DAWG!

and what do you know...but the New Mexico State Poetry Society was there.....and they heard about my poem.... 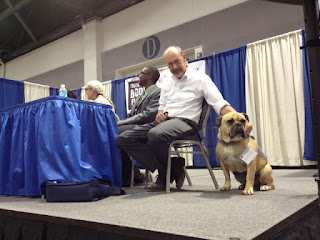 ...and next thing you know.....I'm up on THEIR stage presenting too!

Why you just never know.....MAYBE.....Just MAYBE....I'll be New Mexico's 1st Ever PoET-LAUREATE!  Me-thinks it is befitting! 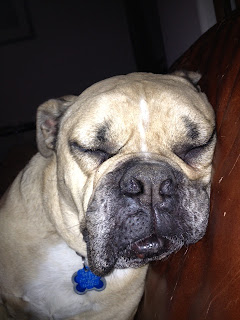