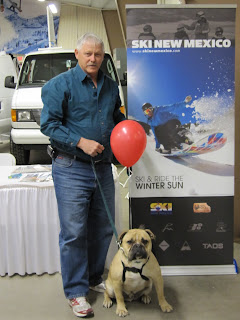 Greetings from Jack-land! Just got back from snowy Chama...and that sure makes a dog want to hit the mountains and ski trails! So....reviewing my trip to the Ski Swap, I revisited my visit with the Big Guy at Ski New Mexico.....none other than George Brooks!

Now if there is anyone that knows New Mexico skiing...it is George Brooks! He was the Ski Coach at UNM for many years...and thanks to him and under his ski leadership, the university took a National Championship.....the ONLY national championship that UNM has ever achieved. And after retiring from this important job...he took on the leadership of Ski New Mexico! WoW!

So...there I am, visiting with the various New Mexico ski resorts at the Swap...and who happens by but his truly.....the Ski King of New Mexico! Got a photo op with him as well....and he took time out of his busy business to visit with this ol' bulldogge!

I quizzed him about skiing in New Mexico and he shared all the great scoop with me. Too many good things to share...so I recommend...head your mouse straight to the Ski New Mexico website and check out all the facts. You'll find everything from daily Snow reports to great ski deals...the whole doggone deal!

As for me, I'll check out the dog friendly ski destinations and action and report back to you later on that front......you can count on Travelin' Jack...the curious bulldogge!

doggie hugs and slurpy kisses!
Posted by Jack, the Bulldogge at 7:12 AM