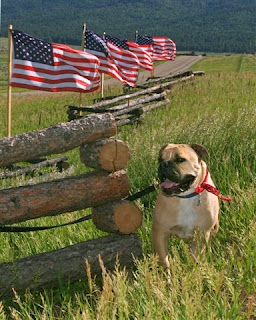 It's a special day today....where we honor our military veteran heroes ALL! That means the TOUGH men,  the BRAVE women and the very talented CANINES ...all who serve selflessly to protect our country.  So today, I put aside bulldog silliness and I seriously SALUTE both our Veterans and our Active Military Heroes...both 2 and 4-footed! 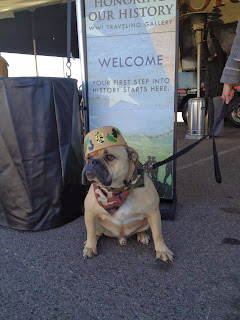 And to share a Special Canine Hero Salute...I'd like to share a special BlogPost from my buddies at PetTravel.com
for this wonderful salute to our Canine Veteran Heroes.  I couldn't say it any better........

Military Dogs: A Salute to our Heroes on Memorial Day


Memorial Day is a time where we give tribute to those men and women who fought for the freedom that we enjoy today. Those efforts also included special canines who endured extensive training and put themselves at risk in order to protect our troops and further their missions. As Pet Travel is all about canines, we felt it was appropriate to honor our four legged friends and the service they have given to their country.

Canines have been trained to serve for centuries. Search and Rescue pets find survivors during natural disasters, service animals help humans with disabilities and comfort/support animals help children and adults cope with emotional circumstances. Dr. Amy, our local Veterinarian currently volunteering in Iraq, tells us that just like a civilian service dog, each military canine has their own special function. “Many (people) don’t know that, inside the forces, different dogs have different jobs. You have the narcotics dogs, apprehension dogs, search and rescue and so on.” Dr. Amy also went into detail on what common breeds make the best military canines and why. “The most commonly used breeds are the German Shepherds, Belgian Malanois and Belgian Shepherds. These dogs are extremely intelligent, focused, independent and driven; all good reasons to why they are selected to be working dogs.”

Canine Military History: Military trained canines have been used by the U.S. since World War I. Currently the pentagon employs 2,700 canines and there are 600 canines currently serving in the Middle East. They protect, track and save lives of military personnel by detecting explosive and sensing enemy ambushes. Their sense of smell and sound makes them irreplaceable by machines or equipment. Before a dog is anointed a military canine they must go through an extensive evaluation. The animals must be tested for aggression, fear of gunshots, and searching capabilities. They also go through a physical evaluation including x-rays and joint MRI’s to make sure the pets are in top condition. Dr. Amy also tells us “they have to maintain this training and be recertified and reevaluated continuously.”

Canine Heroes: To celebrate Memorial Day PetTravel.com has acknowledged below a few of the many canine soldiers below whose contributions went above and beyond in the Special Forces.

Barry: German shepherd: Barry spent 11 years serving with the 90th Space Wing Security Forces helping in a variety of roles. He has been deployed oversees four times, and has searched thousands of vehicles and buildings. Barry was also used as special protection to dignitaries such as Bill Clinton and George W. Bush. Upon retirement in 2003, Barry was presented with the “Meritorious Service Medal”. His 98% proficiency rate in explosive detection and his faithfulness to his handlers gave him the slogan “the ideal military working dog”.

Stubby: Chihuahua Mix: Stubby was adopted by the 102nd Infantry of Massachusetts in 1917. During World War I, Stubby kept watch and alerted troops of German attacks. Stubby was also a prisoner of war, but was eventually saved by American troops. Stubby returned home a hero. He was wounded in battle (but recovered fully!) by a hand gre

nade and was issued the Purple Heart Award. After his time in the war, Stubby frequently made trips to the military hospital to make rounds and cheer up troops. When Stubby passed on in 1926, he was preserved and displayed with his medals at the Smithsonian Institution.

Chips: German shepherd/Husky/Collie Mix: Chips was donated to the war effort shortly after the attack on Pearl Harbor in 1941. He’s famous for the 1990 Disney movie Chips: The War Dog. His primary duties were to guard tanks, ammunition and sleeping officers. Chips was awarded both a silver star and a purple heart for his heroic efforts in capturing an entire enemy fleet! He was the most decorated canine of his time.

Just like your pets provide you with love and protection, so do dogs that serve our country provide this for our soldiers. We salute them as well as all dog owners and wish them a happy Memorial Day. 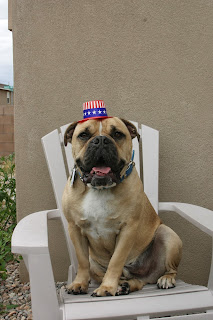 Doggy Hugs and Slurpy Kisses!
Posted by Jack, the Bulldogge at 9:05 AM