Ground Hog Day for this Dog! 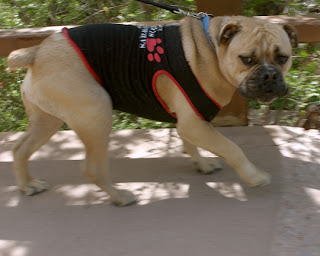 But dog-seriously,  it's not to say I don't have a thing or two in common with the sage  Punxsutawney Phil!

Yes, it's true that he wears the Top Hat for being "The Seer of Seers...the Prognosticator of all Prognosticators"  and he did  declare to the world today that because he saw his shadow....there will indeedy be 6 more weeks of winter!

"How does that have anything to do with you Travelin' Jack?"  you are sayin' about now?  Well here's the thing.  I got up doggone early to tune into the TV to see what my groundhog buddy had to say....BECAUSE....

while I'm NOT the Seer of Seers....or the Prognosticator of All Prognosticators  I AM.....(drumroll here)...... Travelin' Jack-the all-knowing Roving Bulldog Reporter!
And on this Ground Hog's Day I'm hitting the road on another dog-venture! I can't wait to hit the highways, the byways, the villages and the landmarks of New Mexico!  Yep, we're exploring the "Land of Dog-chantment".....as I would say!

We're heading south.....while P. Phil might see some shadows...I'm heading to the land of sunshine.....Las Cruces!  There's a reason why they say "STAY SUNNY" in Las Cruces....and I'm in search of those sunny days and warm February temps.  Yup-Pup....I'm gonna get some "sunning" in on this trip!

And I've booked my Pet-Friendly Room at the bee-u-tiful Hotel Encanto .....it's stylin' time for this travelin' pup!  The Heritage Hotels are TOP PAWS from what I've seen on my research......I'll report back to you following my trip and give you this low-down dog's review with full dog-details!

I'll be snoopin' around the area too......in addition to catching some rays...I'll be on the lookout for those pesky unidentified photos in New Mexico's  "Get the Picture" Challenge. Gotta get my quota of FOUND FOTOS on this trip ya know.  So....I'll be exploring pretty doggone hard too!  I'm thinkin' Old Mesilla might just have something hidden there awaitin' for me!

And then I'm winding my way up through New Mexico....passing through Ruidoso and Lincoln and some of the old west sites along the way......again, lookin' for those photo ops for the Challenge!

So,  before I hear Jill yell "HIT THE ROAD JACK"...I'm gettin' my bags packed (with all my favorite goodies, food, water, toys, blankets & dog-cetera----your pet travel tip of the day )

Don't Forget To Pack for the Dog Too! 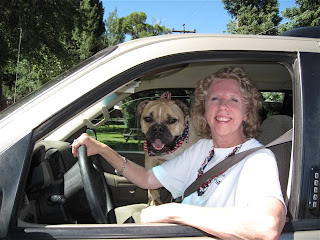 So THERE Punxsutawney Phil....ya got NUTTIN' on this Travelin' Dog!

See ya' down the highway!  I'll be reporting back soon!

Doggie Hugs & Slurpy Kisses!
Posted by Jack, the Bulldogge at 9:24 AM